Venture returns are often characterized as having a ‘power curve’ distribution. We have also noted this in our assessment of venture returns.  We get a fair number of questions in this area, so we thought a brief article could help show what this means and its implications.

Although we’ve roughly fit return data to various distributions, we principally operate by sampling from our data set and don’t rely on any particular distribution characterization.  However, the data results do not fit the ‘normal’ distribution.  This can be seen by looking at the distribution histogram or observing that increasingly sized random sub-sample group means converge very slowly on the sample mean. Example distributions from 500 normally distributed (left tail removed below 0) with similar resultant means are shown below for contrast. The first chart uses data with a larger standard deviation to include a wider range of outcomes, though it still captures far fewer outcomes at the higher end (above 39 in this chart).

When the random comparison data is matched to have a comparable number of items in the lower buckets, it becomes dramatically narrower, and the likelihood of larger returns becomes vanishingly small.  In this example, the highest return was forced to 39 for comparison purposes, though that value doesn’t typically appear in the distribution, as it would be nearly ten standard deviations from the mean.  The typical bell shape is clearly visible for these narrower randomization parameters. 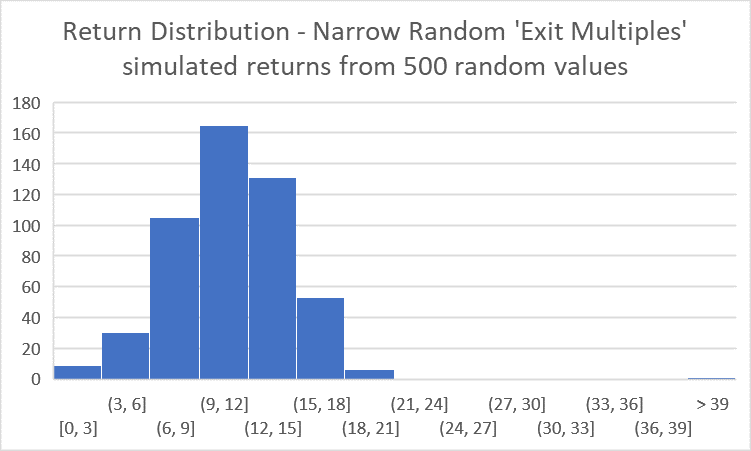 All of these distributions have a mean near 10.9.  To resemble the tail of actual distributions, the standard deviation parameter must be high for the normal random comparison set.  The first random data set illustrates this.  This leads to a wide, but heavy tail, though it under-represents large outliers in the actual distribution.

The concave vs convex shape and concentration near zero of the actual distribution also illustrate the outcomes don’t follow a normal distribution and have key power curve characteristics.  The power curve drops quickly and has a very long tail.  This first random comparison uses a wide standard deviation to create the wide tail, giving it much wider dispersion overall.  The second comparison illustrates random distribution when the number of lower end outcomes is roughly matched, essentially eliminating the upper tail by using a much smaller standard deviation.

The actual real-world data used in for the first chart selects 500 random real-world events from our data, creating a mean in this case of 10.9x return.  The return mean for actual data increases substantially as larger sample sets are selected.

The Effect on Venture Portfolios
When you see the effects visually in a histogram, or in parameters of various distributions, it is clear that early-stage venture returns aren’t ‘normal.’  Since our reasoning naturally, and not coincidentally, aligns more with normal variables, we need to examine the effect on portfolios.

We’ve done billions of simulations for our forecasts.  This gradually builds intuition but doesn’t demonstrate the effect succinctly.  A quick look into this set of real data, and a comparison to ‘normal’ random data with a matched aggregate outcome, helps show the contrasting behavior.

The following chart shows an excerpt of the 500 real-world outcomes in random order.  The cumulative mean is the mean return up to the particular row.  This shows the equally weighted behavior for progressively larger groups.  The cumulative value is lower at first and is in the range of the aggregate 10.9 mean in the 175th row illustrated.  In some random orders, convergence happens more quickly or more slowly.  However, the convergence is less predictable and slower than with normally distributed return values, which I’ll show next. Randomized Normal Outcomes for Comparison
When a normally distributed randomized set of outcomes with the same 10.9 mean is similarly reviewed, we see different behavior.  In this example scenario, the cumulative mean stays much closer to the mean, even using the wider set of data described earlier.  In real-world terms, ‘normal’ sampling behavior occurs, and a small group quickly converges on the larger set. The Bottom Line
The expected returns based on historical outcomes for venture don’t track with ‘normal’ sampling outcomes.  A small portfolio, even dozens of companies, isn’t expected to capture the value of a broad portfolio in most cases.  An occasional small portfolio will dramatically outperform the mean, while the vast majority of small random portfolios underperform.

This illustration with a small set of data shows the effect in fairly concrete terms.  The effect is stronger in earlier stage investments, shown here, but is present throughout the venture spectrum we’ve reviewed, and plays a smaller role in the larger private equity universe.

We hope this helps you see the reasoning and data behind some of Hatcher’s strategy.